It was a sad day as we said farewell to Elaine Palmer, queen of the breakfast shift at the Brackenborough Hotel, finally hanging up her order pad, in favour of retirement with her husband Terry.

Elaine holds the crown as the longest serving member of staff to the Lidgards. Already working at the Granby in North Thoresby when John & Audrey Lidgard took it over in the 80s, from there Elaine moved with them to the Brackenborough when they bought it later that decade.

Elaine started making pastries at the Brackenborough, and gradually worked her way around the various departments in the kitchen – salads, working on the grills – there wasn’t much Elaine couldn’t do! When Ashley Lidgard, son of John & Audrey, bought the business from his parents, Elaine remained firmly in place as a key member of the team.

When she had just turned 50, she was encouraged by Ashley to undertake a patisserie course at the local college, which then led to a promotion to Patisserie Chef – making desserts for both the Brackenborough and Ashbourne hotels.

Elaine moved to the Ashbourne for a short while after this, before coming back to the Brackenborough two years ago, to help the breakfast department get back on its feet. And at the Brackenborough is where Elaine ended her marathon 33 years with the Lidgards in their various businesses, and is where we bade her a fond farewell, with an afternoon tea for some of her old regulars, Elaine’s family and the rest of the team she is leaving behind.

You will be sadly missed, Elaine, but we are sure you won’t miss the early mornings!

Ashley said “It is with great sadness that Elaine’s career has come to an end here in the family business, but of course I wish her the very best as she starts a new chapter in her life. I have known Elaine for a very large part of my life, and feel blessed that she chose to stay with us for this long. Her skills and attention to detail will be missed, but I know that she set a high benchmark of standards in her department which I am confident have been passed on to her remaining staff. I wish Elaine a well-deserved rest now – she’s certainly earned it!” 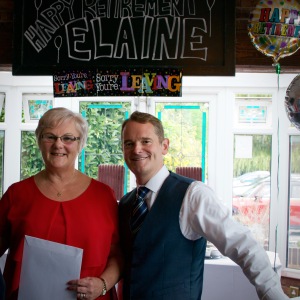 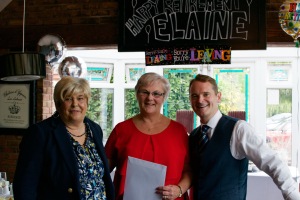 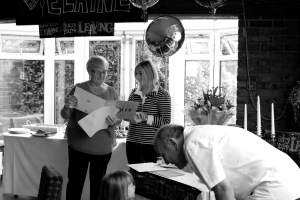